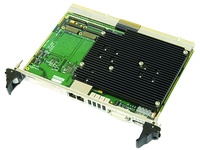 CPC503 Module based on the 3rd Generation of Intel Core CPU is available for ordering.

New СРС503-02 module in 6U CompactPCI format is intended for use in industrial and transport automated control systems. Support of PICMG 2.16 specification enables to build highly reliable multiprocessor computing systems based on СРС503-02. When using additional graphics accelerators in XMC format (module is equipped with a relative slot), processing capacity of such a system could reach up to several teraflops, which describes the system as highly efficient. The 3rd generation Intel Core CPU (Ivy Bridge) has a 22 nm technology and differs from the 2nd generation CPUs by increased performance of: computing kernel – up to 20 %, and graphics kernel – more than by 30 %. Moreover, the graphics kernel supports DirectX 11, Open GL 3.1 and Open CL 1.1 specifications, which extends software development opportunities.

The new CPU made it possible to use RAM, operating on a high-speed 1600 MHz bus. The board’s RAM total volume may reach up to 8 GB, meeting requirements of complex application tasks, designed for quad-core processors. The microchips are soldered on the board which enables the module to withstand high vibration and shock loads. It should also be noted that the use of low-voltage DDR3L memory additionally reduced module’s thermal design power.

Soldered SSD in new version of CPC503 module has been increased up to 8 GB, which will enable developers to use the most up-to-date versions of integrated operating systems.

Video system capabilities have been extended: the new СРС503-02 module is capable of displaying independent pictures to three monitors with DVI-I interfaces or DisplayPort.

For system integrators, upgrading their 6U CompactPCI systems of the previous generations (particularly on СРС501 modules), BIOS settings enable a forced limitation of the thermal design power. Due to this feature, developers can replace the legacy board with the modern one without making any changes to enclosure and heat dissipation structure.