In May of 2015, Baikal Electronics announced the release of Baikal-T1 CPU. Starting from June 01, 2015, the developers received access to engineering prototypes of Baikal-Т1. The CPU was built on the basis of dual-processor superscalar cores of MIPS Warrior P5600 architecture by Imagination Technologies. The MIPS acronym stands for “Microprocessor without Interlocked Pipeline Stages”. This emphasizes the most important feature of this RISC-architecture – the sustainability of the instruction fetching path with CPU functional nodes. CPU core MIPS P5600 is the first modification of MIPS processor cores of the Warrior generation. This 32-bit core features low power consumption and is by 30% less than the similar cores existing in the market. P5600 was primarily developed for the use in telecommunication and network equipment, e.g. in routers and managed switches.

Therefore, all the arithmetic and shear operations are carried out within a single cycle. The functional diagram of Baikal-T1 CPU is shown in Fig. 1. The CPU has three embedded Ethernet controllers, two of which are 1-gigabit and one of them is 10-gigabit controller. An embedded DDR3-1600 memory controller supports up to 8 GB with ECC error control function. The CPU is also equipped with a controller of PCIe Gen 3 bus with 4 lines, SATA 3.0 controller (6 Gb), USB 2.0. Operation frequency of Baikal-T1 is up to 1,2 GHz. The CPU has an integrated 1 MB cache memory. In order to reduce the load to the controller, Baikal-T1 CPU configuration has a modular coprocessor that enables to accelerate arithmetic operations with long integer numbers. Key features of Baikal-T1 CPU are given in the Table 1.


One of the most important CPU feature is its capacity. In order to measure CPU capacity there are various benchmark tests, e.g. Coremark by EEMBC. This test enables to assess capacity of the CPUs, using data structures and algorithms common for all the applications. According to the test carried out by the company itself, Baikal-T1 managed to gain 10342 scores for two threads. These results for Baikal-T1 capacity are comparable with the results of Intel Atom CPU and CPUs of modern smartphones. 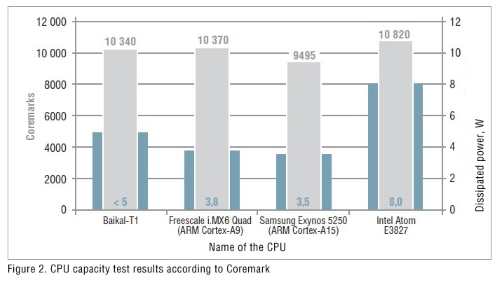 Fig. 2 shows the diagram of Baikal-T1 performance comparison with other CPUs in accordance with the Coremark test, as well as correspondence of the capacities dissipated by each of the processors.

Extensive interaction of the devices with the global Internet network, implementation of such technologies as the Internet of Things and cloud storage servers, makes it necessary to improve methods of data protection against unauthorized access and hacking. In early 2016, the nonprofit organization PRPL introduced a solution to ensure the security of the Internet of Things’ devices and Internet-connected embedded systems for processors with the MIPS architecture. The PRPL foundation is an open public non-profit organization getting together companies in the high-tech industry that invest in innovations in the field of efficiency, portability and compatibility of software and virtualized architectures. The main PRPL areas of interest include data centers, networks and data storage devices, connectable consumer and embedded electronics, Internet of Things.

In the beginning of 2016 PRPL foundation introduced the concept of ensuring the security to devices connected to the network of embedded systems, and devices of the Internet of Things. This approach was first demonstrated at the Mobile World Congress in Barcelona, using the Baikal-T1 crystal system. The main idea of ​​creating security with PRPL Security is to use hardware virtualization and hardware control: the trusted components of the "root of trust" system, secure boot, hypervisor that allows simultaneous and parallel execution of multiple operating systems on the same host computer, and secure data exchange between virtual machines. The Baikal-T1 CPU supports hardware virtualization and up to 7 simultaneously running virtual machines. The PRPL Security environment allows several copies of the distribution package of operating systems to run in parallel on different virtual machines on the same CPU. In the protected domains created in this way, applications and operating systems can operate independently of each other, which in case of unauthorized access to one of the systems rules out the possibility of hacking other components. Therefore, the described and demonstrated security mechanism makes it possible to create tamper-proof telecommunication and network devices and embedded systems connected to the Internet.

Having proved itself as a CPU for responsible telecommunications and network applications, the Baikal-T1 processor has already found its application in domestic devices. A new FASTWEL CPC313 CPU of the StackPC standard is taken as an example (Figure 3).

CPC313 is designed for the use in a wide range of operating temperatures and has a high resistance to shock and vibration loads. The CPU module supports Linux with the v3.19 kernel, the QNX 6.5 real-time operating system and the FX-RTOS hard real-time embedded operating system. The main features of the module are given in Table 2.


It is suggested to use CPC313 for the construction of real-time systems, on-board systems, security and communications means, production control, high-speed data collection and other critical applications designed to operate in harsh environments. The module is designed in StackPC form-factor and is marketed as an evolutionary modification of the CPC309 module based on the Intel Atom D510 CPU for the purpose of its further replacement, which makes it possible to use it in the on-board modular PC platform MK300. Due to the low power consumption of Baikal-T1 CPU, the CPC313 CPU module has low power consumption. CPC313 will have a long-term availability in the market with a guaranteed platform lifetime from 7 to 10 years.